Popular Designer Colognes From The Year You Were Born: The '90s 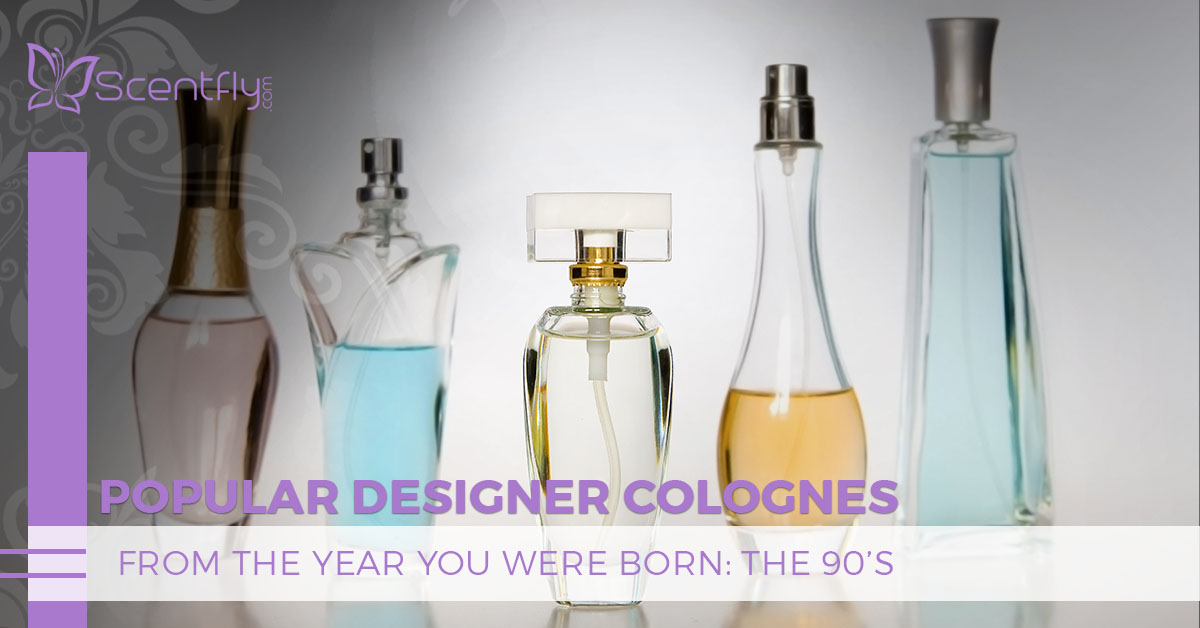 Now that we’ve covered popular men’s colognes during the 1980s, it’s time to move to the ‘90s. Maybe you were born in the ‘90s or maybe you were already wearing some of these scents, but check out the most popular luxury fragrances for men in the decade that ended the millenium.

Starting off the ‘90s, Moschino released Moschino pour Homme, the most popular scent of the year. It’s powerful scent has great longevity and above-average sillage (meaning the trail that the scent leaves behind).

In 1991, the popular clothing brand Lacoste released its designer cologne Land, an Après Rasage or after shave. The most popular fragrance in this year was lighter than others and can be worn without being too overpowering.

Loewe pour Homme by Loewe was the most popular designer cologne released in 1992. Like the best luxury fragrance for men from the year before, Loewe pour Homme is not as strong as other scents and can be worn on a day-to-day basis without being overwhelming.

With a name like Gold Cologne, it’s no surprise that this scent has a well-documented fragrance profile and was the most popular of the year. Amouage’s 1993 designer cologne is characterized by its notes of amber, geranium, jasmine, patchouli, rose, sandalwood, frankincense, and ylang-ylang. It’s a spicy, powdery scent with great longevity.

1994: Colours for Men by Alexander Julian

The most popular designer cologne of 1994 was Colours for Men by Alexander Julian. More so than most, this men’s fragrance is incredibly strong, lasts for an extremely long time, and has a sillage that really lingers. It has notes of blossoms, spices, moss, sandalwood, patchouli, and musk — all very heavy scents.

The most popular men’s fragrance of 1995 is another with a well-documented fragrance profile. Addiction - Wild Ginger by Fabergé has an above-average sillage, with top notes of citrus; heart notes of fruit, ginger, and oriental notes; and base notes of sandalwood and other woody notes. While the scent isn’t altogether overpowering, it does leave its mark.

As the years went on, it seems that men preferred more subtle scents that still leave an impact. In 1996, L’Eau de Basic Homme by Vichy was released and took its place as the most popular designer cologne of the year. Like Addiction - Wild Ginger from the year before, L’Eau de Basic Homme is also a more subtle scent that has a higher than average sillage for a light, but lingering, fragrance.

Men’s cologne continued to become more sophisticated and well-rounded in the later half of the decade. In 1997, Gold Jeans pour Homme by Roccobarocco was the most popular designer cologne. It has top notes of lavender, bergamot, lemon, mastic resin, and juniper berry; heart notes of jasmine, artemisia, nutmeg, clove, cardamom, tarragon, pepper, and plum; and base notes of ambergris, cedar, oakmoss, and sandalwood.

Have you ever smelled the air in the Rocky Mountains right after a fresh rainfall? If you have, you know exactly why Route 66 Colorado Rain by Coty was the most popular men’s fragrance in 1998. Its scent is fresh, citrusy, strong, and lingering — just like any good rainfall.

The decade ended on a high note with Very Valentino for Men by Valentino as the most popular designer cologne of ‘99. The scent is oriental and spicy without being too overwhelming of a fragrance.

The ‘90s were a great decade for the evolution of men’s cologne. You can see it evolve from strong and powerful to more subtle and sophisticated. At Scentfly, we carry a variety of designer colognes to fit your personal taste. Try a variety of samples when you subscribe to receive different brand name colognes once a month.