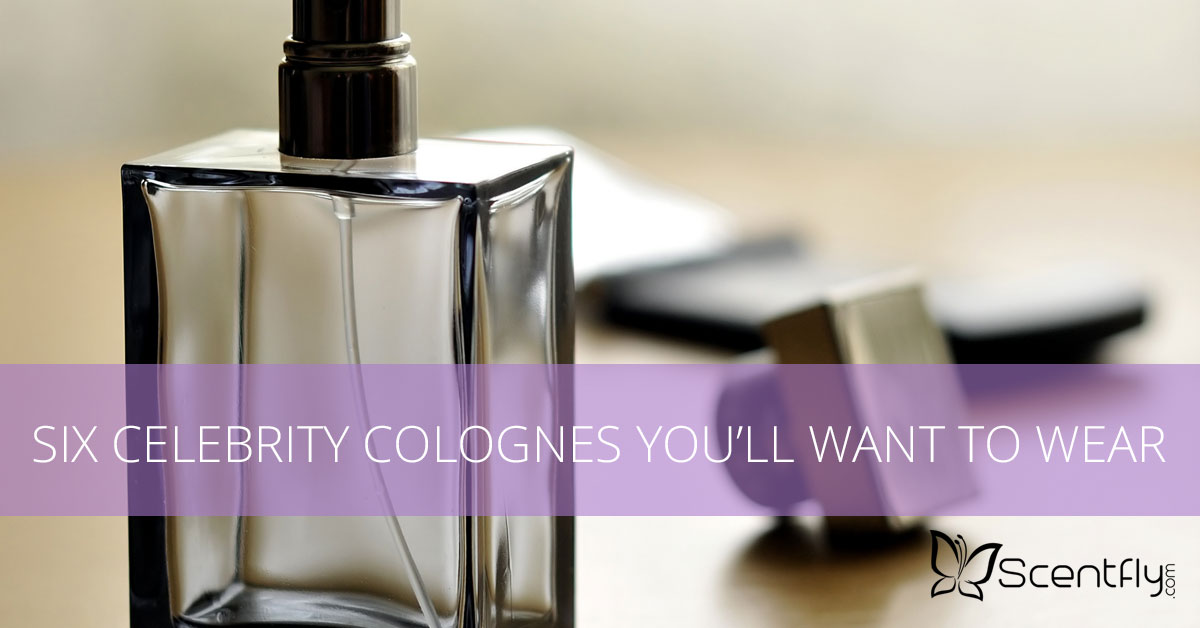 While celebrity scents might have started as a ladies’ game, famous men were quick to join in. Most celebrity colognes are designed to exude power, sex appeal, and a lavish lifestyle, and these six fragrances do just that. Want to try these colognes out for yourself? Sign up for a monthly perfume subscription with Scentfly. Just add your favorite scents to your Wish List, and we’ll take care of the rest when you subscribe.

Unforgivable For Him by Sean John: Some of you may already know that Sean John is Sean “Diddy” Combs’ fashion and lifestyle brand. Unforgivable was launched in 2006, and is touted as one of Diddy’s best fragrances. This Diddy cologne even won the FiFi Award for Men’s Fragrance Of The Year in 2007. With top notes of birch leaf, basil, juniper, and citrus flavors from grapefruit, bergamot, and lemon, Unforgivable is clean and light right from the start. The middle notes of the celebrity fragrance include iris, lavender, and sage, adding a herbal, earthy element. This cologne has base notes of amber, tonka bean, rum, and cashmere wood, all cumulating for a well-rounded, masculine cologne that isn’t overly powerful.

3AM by Sean John: Because of how much commitment Diddy has to the Sean John brand, we are dedicating two spots on our men’s celebrity fragrance list the music mogul. 3AM, as you can probably guess from the name, implies pulse-racing sensuality and sex appeal, as well as strength and freshness. As the perfumer who created the unique formula for this scent, Ilias Ermenidis, said, “At 3AM, you want to be devoured or you’re going to sleep. That’s it, there’s no in-between.” True to that statement, this masculine fragrance has top notes of citrus and cardamom for freshness, but the middle and basenotes steal the show with hints of orange blossom, geranium, fig leaves, smoke, suede, and leather.

UR For Men by Usher: Usher has a few fragrances to his name, as well, but UR is a great light, daytime scent for the office or hanging out downtown. This aquatic cologne is fresh and has hints of sea water and forests. This scent was introduced in 2008, and has top notes of fruit and citrus. The heart of this unassuming fragrance lies in the earthy scents of nutmeg, bay leaf, sandalwood, and basil. While this scent is subtle, it is exactly the right mix of cool and warm flavors that some guys are looking for.

Seduction In Black by Antonio Banderas: We’ll be honest, Antonio Banderas has too many colognes and perfumes to his name to count (seriously, there’s well over 60 different scents). So, we chose one of our favorites to make it easy. Seduction In Black was released in 2009, and has been well-received since. This scent, true to its name, is seductive and dark. With top notes of blackcurrant and bergamot, this celebrity cologne starts off zesty. But don’t be fooled. The hearty middle notes of Seduction In Black sprout pure masculinity with spicy and warm nutmeg, cardamom, and coriander, making it enticing and inviting to potential love interests. The base of this sensual scent includes amber, tonka bean, musk, and cedar, making it the perfect scent to wear on a date or to draw attention at the club.

Signature For Him by David Beckham: We’ll just throw this out there: can you really go wrong when smelling like David Beckham? Both David Beckham and his wife, Victoria Beckham, have had multiple knock-out fragrances in their careers. Signature, though, remains one of the most popular by the soccer star. Opening with fresh notes of watermelon, mandarin, and ocean water, Signature starts off light and airy like a summer day. However, the middle notes are the true heart of this fragrance, with hints of cypress, juniper, and lantana blossom. Signature’s base notes include patchouli, amber, and oakmoss. These aromas all come together to create a celebrity cologne that is fresh, woody, and aquatic all at once.

Power by 50 Cent: This first scent from 50 Cent debuted in 2009. The bottle is instantly recognizable and undeniable masculine, not unlike the scent itself. This spicy and fresh scent starts off with top notes of lemon leaves and black pepper. The middle notes that make up much of the depth of this fragrance include coriander, nutmeg, and woody aromas. And pulling it all together are the base notes of patchouli, musk, and moss. Although this scent is called “power,” it is actually quite a light scent on the nose, so you can wear it to the office without being too fragrant. The power doesn’t come from the strength of the scent itself, but from the aromatic notes that create a masculine, woody, and herbal luxury fragrance.

Why Choose Just One?

There are so many male musicians, actors, and sports stars who make some of the best colognes for men, so why commit to just one? Subscribe for a monthly cologne subscription with Scentfly today, and choose which scents you want to receive each month. Learn more by heading to our Subscribe page and signing up today!